What is Coax Cable? 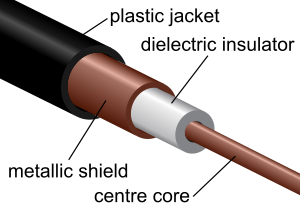 Coax Cable is a type of cable that has existed for a surprising amount of time. It was invented around 1880 by the English engineer and mathematician Oliver Heaviside. The design’s efficiency and the term coax, or coaxial, are owed to the a single geometric axis that is common in the cable’s component parts.

Coax cable consists of a single conducting wire surrounded by an insulating material surrounded by a layer of conductive shielding and then sheathed in an insulating plastic. The conductive shielding and the inner conductor are the components that share the same geometric axis. The size of the specifications of the insulating material are significant as well. The signal that is carried along the cable actually exists in an electromagnetic field between the inner and outer conductor.

Coax cable is produced with a conductor spacing that is optimized for radio signals. This allows it to be used in radio, television and computer connections.